Chobe National Park is a true wildlife paradise and one of the best national parks in Southern Africa. Just one peek at the variety of wildlife and lush vegetation and you will be mesmerized forever! The gateway to Chobe is Kasane, a small town near the borders of Zimbabwe, Zambia, and Namibia.When you visit the Chobe National Park, you will never forget the first glimpse of the dazzling, deep blue Chobe River, as it winds its way through sandy terrain, small towns, lush floodplains, dense forests of cathedral mopane trees, and endless broad leaf woodlands. The park is named after the majestic river that protects 10.700 sq km of the northern Kalahari desert, providing ensuing wilderness and a steadily remarkable game density.Chobe National Park is Botswana’s first National Park and has one of the largest concentrations of game in Africa. By size, it is the third-largest park in the country, after the Central Kalahari Game Reserve and the Gemsbok National Park.

If there's one memory that you'll take away from a Chobe safari, it's that of elephants. About 120,000 elephants live in and around Chobe National Park, and inconceivable numbers of these gentle giants can be seen crowding the banks of the Chobe River during Botswana’s dry season from May to October. Chobe is also one of the best places in Africa to witness the most dramatic predator action – its Savuti region is where lions regularly clash with hyenas and powerful points of pride famously take down Africa’s biggest game like buffalo, giraffe, and even elephants.

Visiting Chobe National Park is more than just crossing the Big Five off your list. We would love to provide a simple ‘this is the best time to visit’, but there is no such thing when it comes to Botswana. The Chobe National Park changes dramatically with the seasons, making it a year-round destination. Feel free to come at any time to experience the wonder.Botswana has both wet and dry seasons. In Chobe National Park, you will find a wider variety of bird species during the wet season.The best time to visit Chobe for birding is during the summer months when all the migrants are in the area. Late October through to April provides some of the best bird viewings in Botswana."

Activities at the Park

How To Get There

Guide To Chobe Month By Month

South African Airways offers flights to some airports in the vicinity of the reserve. From Tambo Johannesburg International Airport in South Africa, it is possible to travel to the Kasane Airport (BBK), Livingstone Airport (LVI) in Zambia, and Victoria Falls Airport (VFA) in Zimbabwe. Another possibility is to travel from Botswana's capital city of Gabarone to Kaanse. From all airports, it is possible to continue the journey to your Chobe safari lodge by road transfer.

Chobe National Park is the elephant capital of the world featuring over 50,000 elephants found throughout the park.

Bird-lovers will appreciate the opportunities that safaris in Chobe offer to the bird-watching travellers.

Once inhabited by the San bushmen, Chobe National Park is unique with its San paintings that were carved into the rocks.

Boat and sundowner cruises here add a different dimension to your experience, as you glide past gigantic crocodiles, fish eagles, monitor lizards, and elephants drinking water.

Chobe National Park is about the size of Northern Ireland and a haven for the biggest elephant population.

There is currently only one safari property inside the park’s popular north-eastern sector, Chobe Game Lodge. 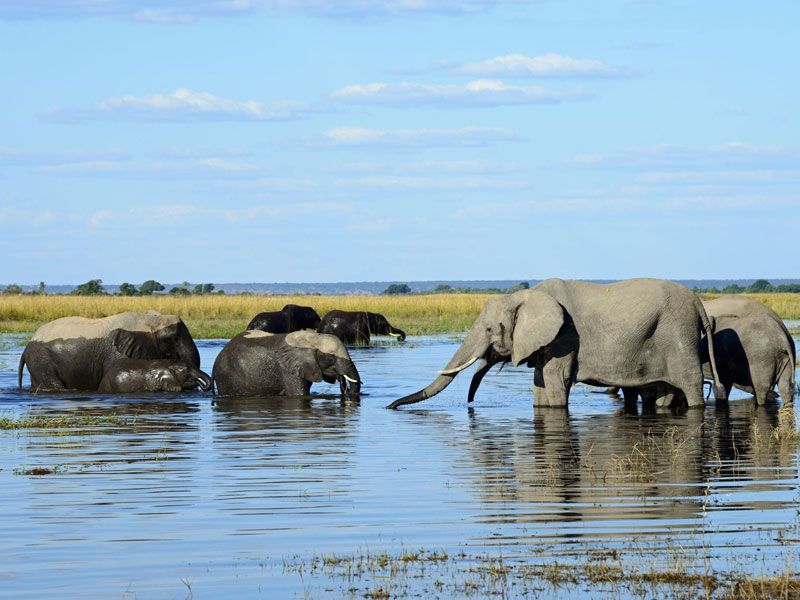 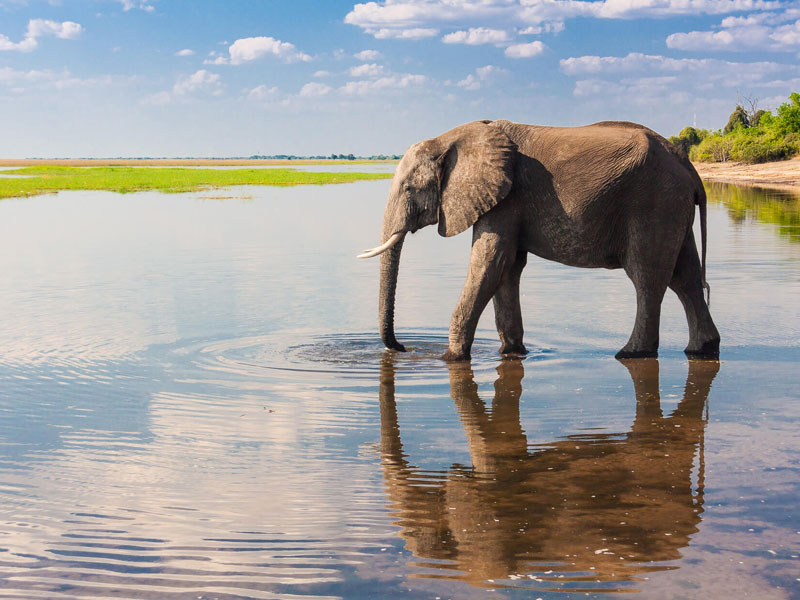 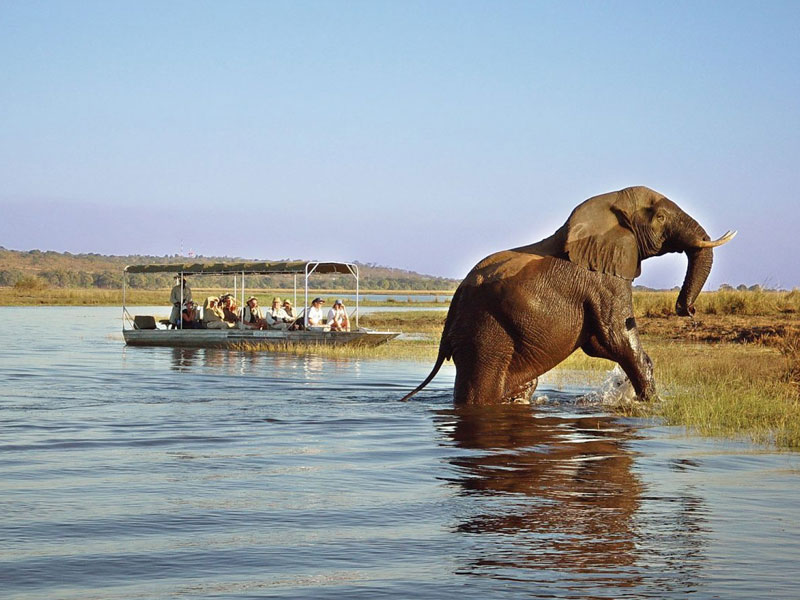 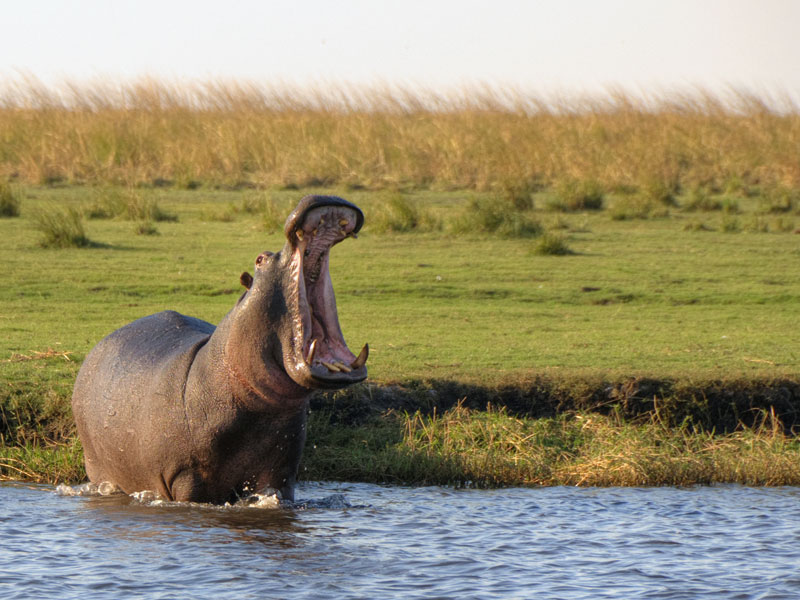 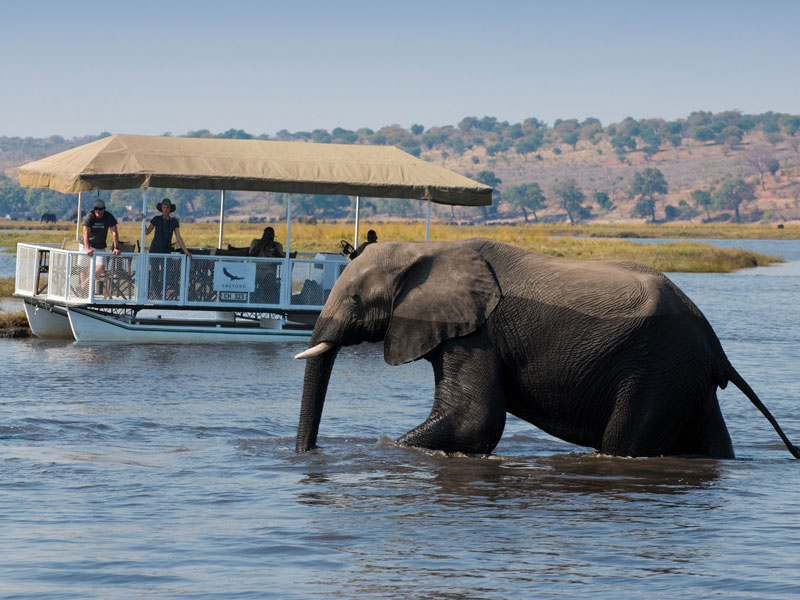 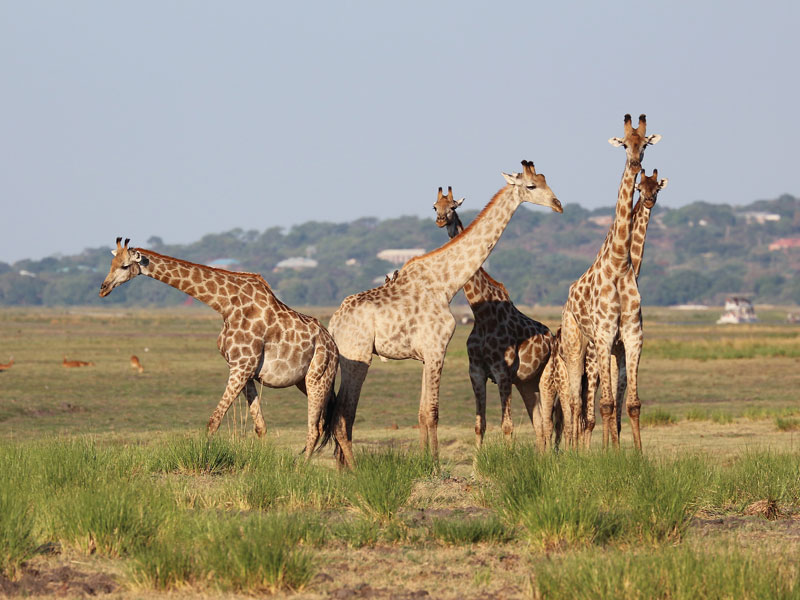 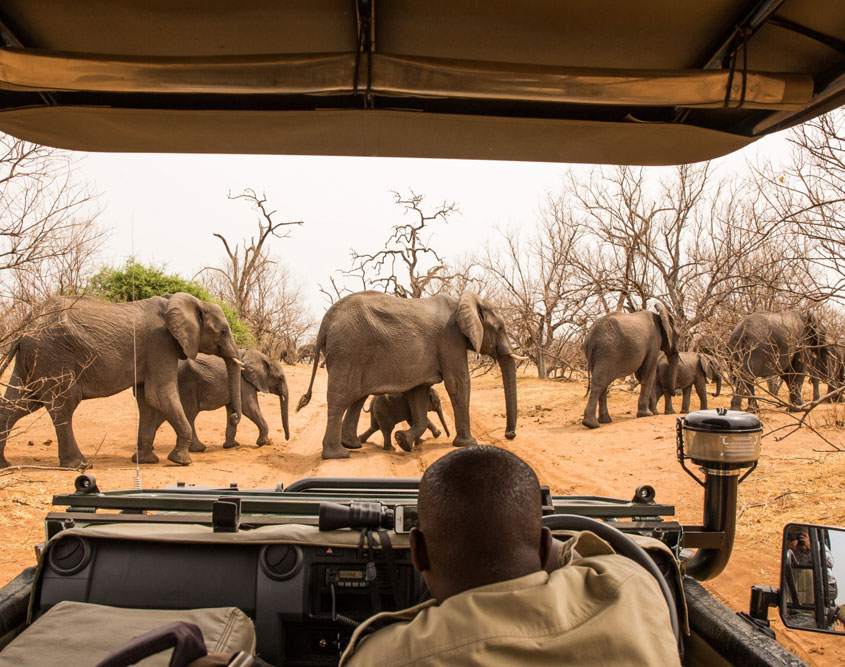 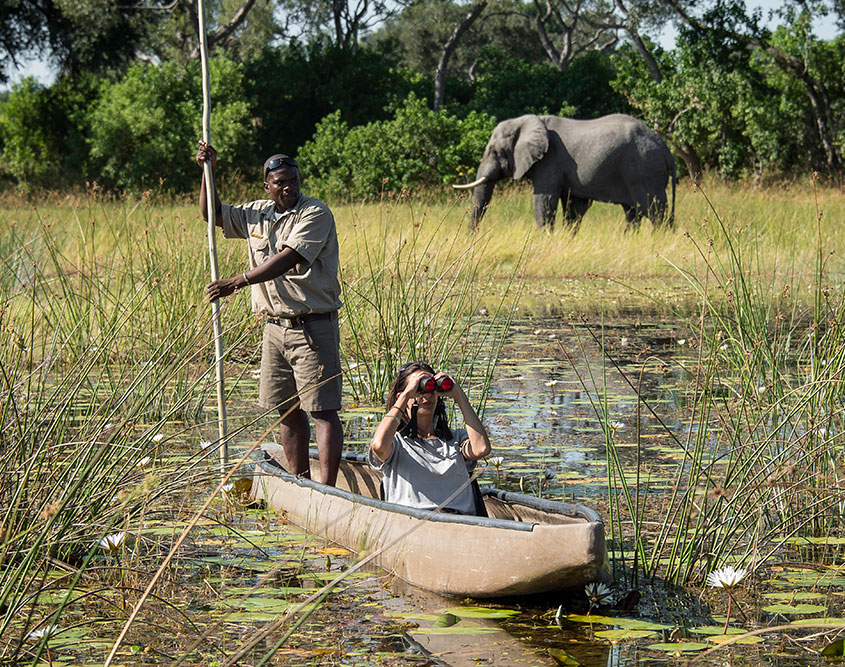 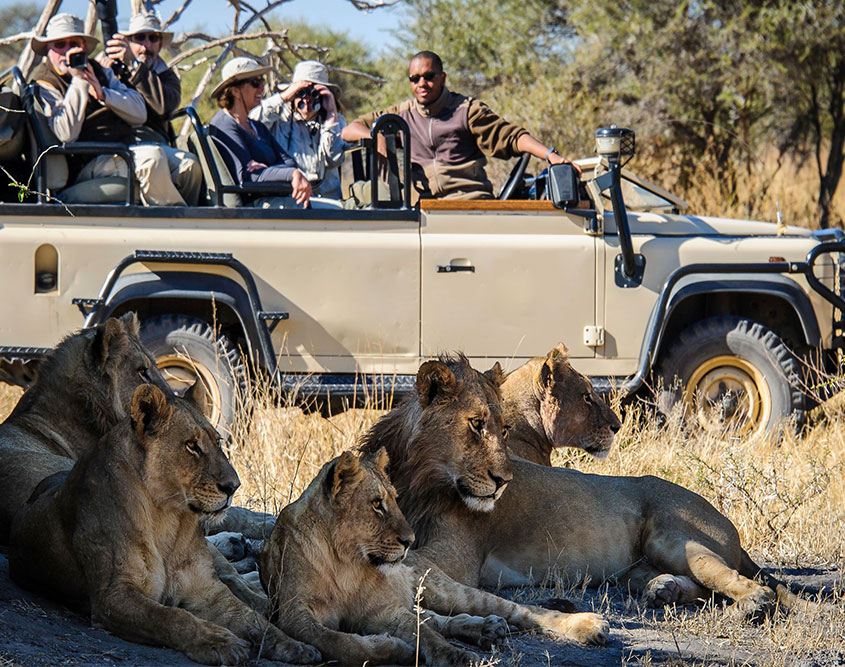 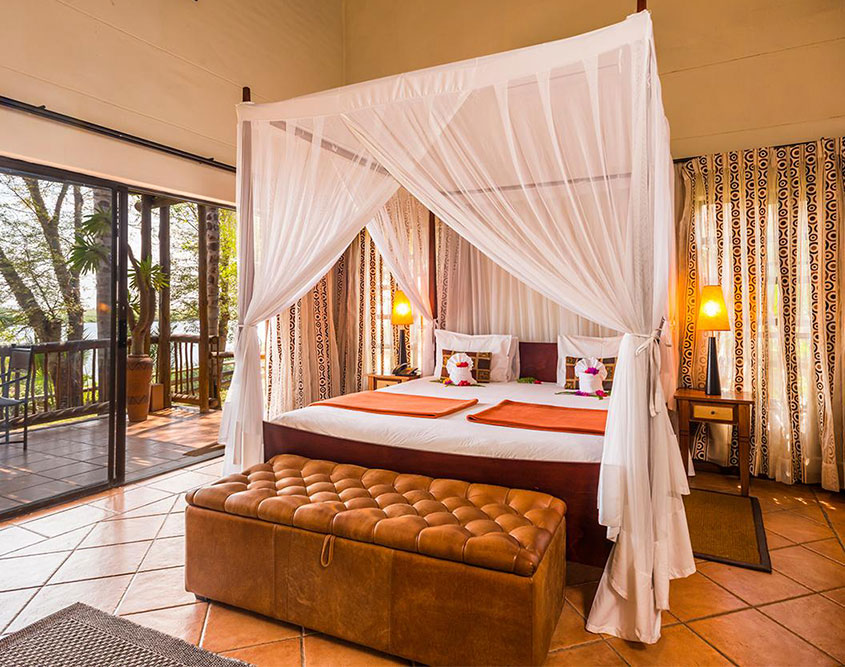 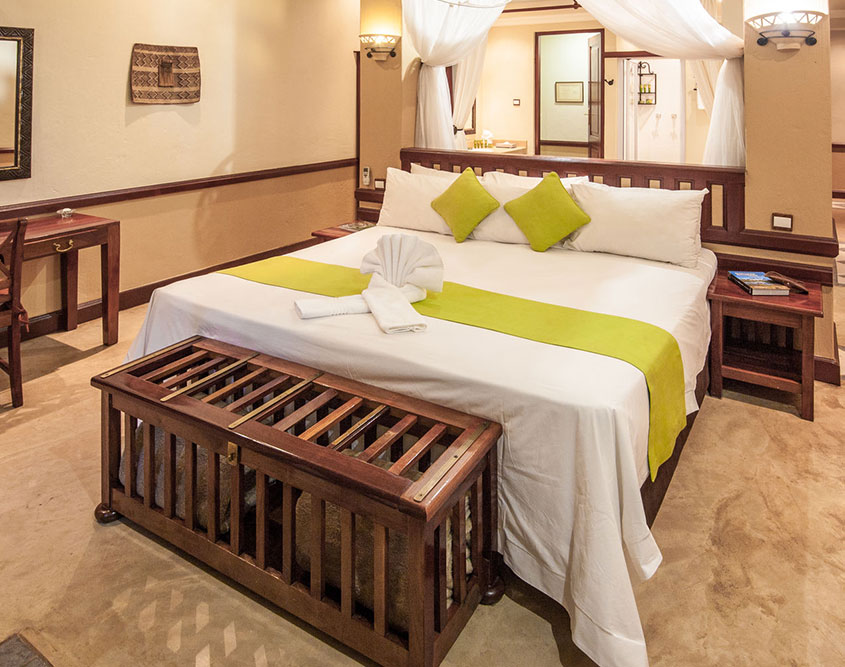 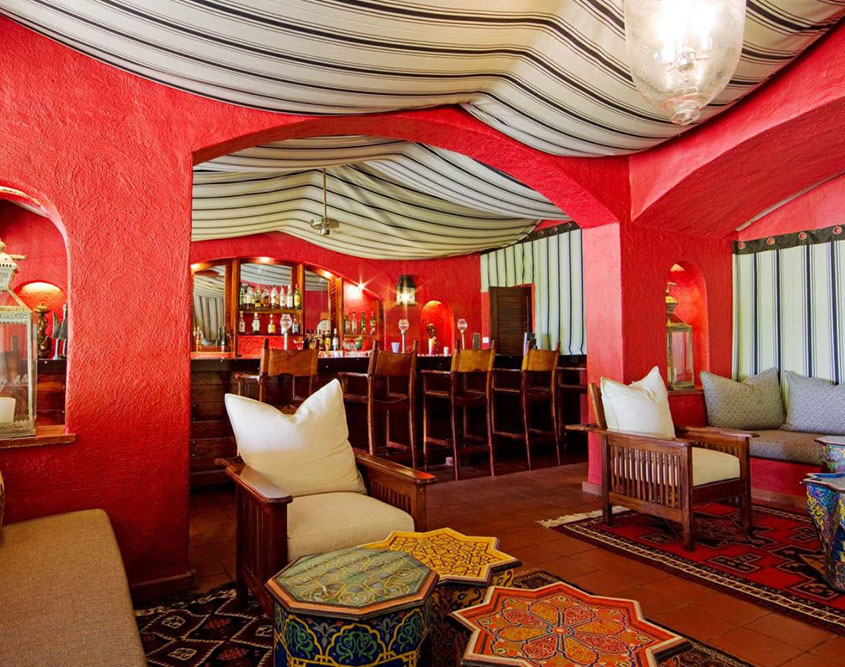 Chobe-Safari-Lodges is naturally head of the class when it comes to luxury travel planning because we do more homework than anyone else. We will love to tailor-make your trips. Just let us know how you want it, and we will make it happen.And they must show, on every trip, that our guests give them top grades for their hard work and creativity. 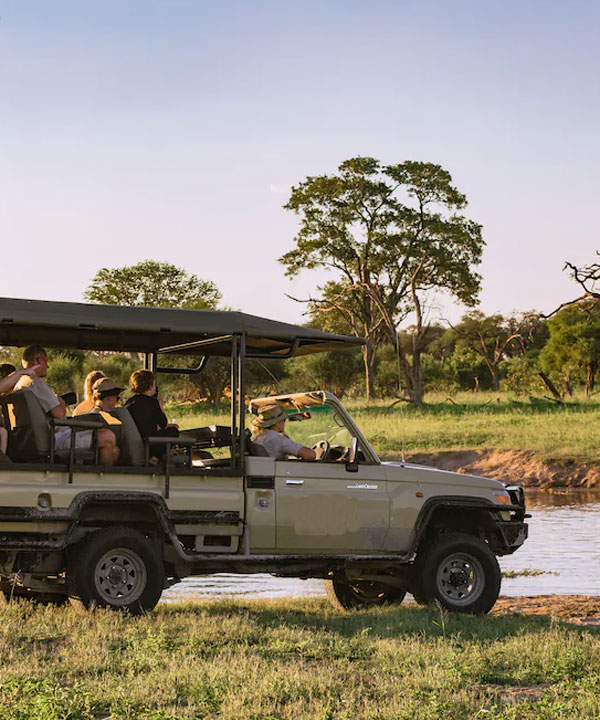 confirm each agent has exceptional destination knowledge and insider connections

ensure that each travel specialist meets world-class standards, and a minimum 4.25 out of 5 star rating.

Your money is safe with us. Our clients are fully covered by our supplier default insurance.

Always there for you, from before you travel to after you return home. 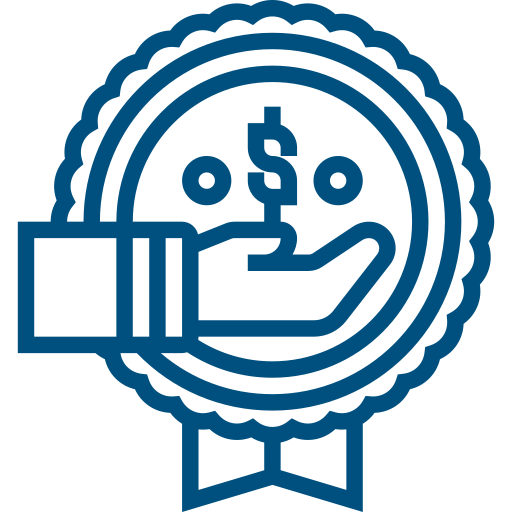 You will always get the best value with us, in one complete tailor-made itinerary.

We travelled with Falcon Safaris in Zimbabwe and Botswana for 16 days. Falcon designed a wonderful trip with private guide to the most interesting sites in both countries. The organization of the whole trip was excellent, flights within the country, accommodation and activites. The guides were very knowledgable and told us a lot about the countries, their history, people, economy and much more.

Our Consultant Vimbai was very helpful and accommodating. We stayed at the Elephant hills hotel which was nothing short of amazing. Our activities included a helicopter flight, dinner cruise as well as a morning game drive. All the activities were absolutely amazing.

Our trip consisted of accommodation and tours in Victoria Falls, transfers to Botswana, accommodation and photography safaris there, then transfers back to Zimbabwe. Transfers, accommodation again in Vic Falls.My communication was with Ludwick who was amazing. He went way above and beyond normal service to make me feel confident in the organisation of our trip

We worked with Gertrude to schedule and organize everything and she did an excellent job. I asked a lot of questions via e-mail and she answered everyone in a timely helpful manner. Our guide at Victoria Falls was also great. He met us at the airport, provided a thoughtful tour of the Falls and got us to our next guide in Botswana.

Falcon safaris have given my the correct advice with excellent service. The only suggestion will be to work closer with the lodges to confirm bookings as soon as possible. We have booked and pay our deposit a year in advance. We have only receive our final convermation from Chobe Safari lodge a week before departure.

I thoroughly enjoyed my afternoon with the elephants. I rode an 8 year old female, her name is not in my head, and it was magical. She loved her treats at the end of the ride and her trainer was a lovely man. We talked the whole hour and he taught me so much about these magical creatures.

Gertrude was always very prompt in replying during the planning process and very helpful with visa information. This trip to Africa was our first and we started with Kenya and a 10 day safari. We wanted to experience water camps and lodges as well so worked with Falcon to make that happen.

myself and my 13yr old daughter used Falcon Safaris for all our outings as well as airport transfers. Canoeing, Devils Pool visit and Elephant back ride. They were all fantastic especially Vimbai and Edna. We had an amazing time and nothing was too much trouble to sort out for us.

With over 120 resident different tribes, there is plenty of local history and colour to be found in all areas of Tanzania. Tanzanians are among the most welcoming and approachable on earth with diverse and unique cultures ready to be shared with visitors. It is a rewarding experience to leave your 4X4 vehicle behind and walk through scenic and authentic local villages. Spend part of your time to meet friendly faces of Tanzania and learn about their ways of life

Take the hassle out of your trip planning. We'll match you with top travel specialists.

Help Me Plan My Trip